The growth of communities usually followed the development of mills. Generally a community consisted of some of the following: a mill(s), church, school, general store, hotel and post office. There were approximately twenty communities in Esquesing Township but some now exist only as the name of a road (Lawson Road), a sign post  (Whaley’s Corners) or a pioneer cemetery (Mansewood).  The history of thirteen of the larger communities has been recorded in pamphlets found in the Communities menu above.  More community photos from the EHS archives can be found in Photo Gallery #4  in the above menu Esquesing Township: 200 Years.

In 1866 the post office opened with name Salmonville, renamed Terra Cotta in 1891. According to early settlers ”At spawning time one could fairly walk across the backs of the salmon” on the Credit River. 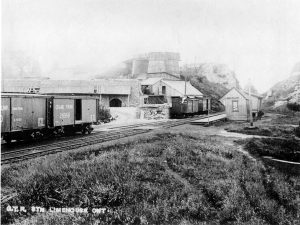